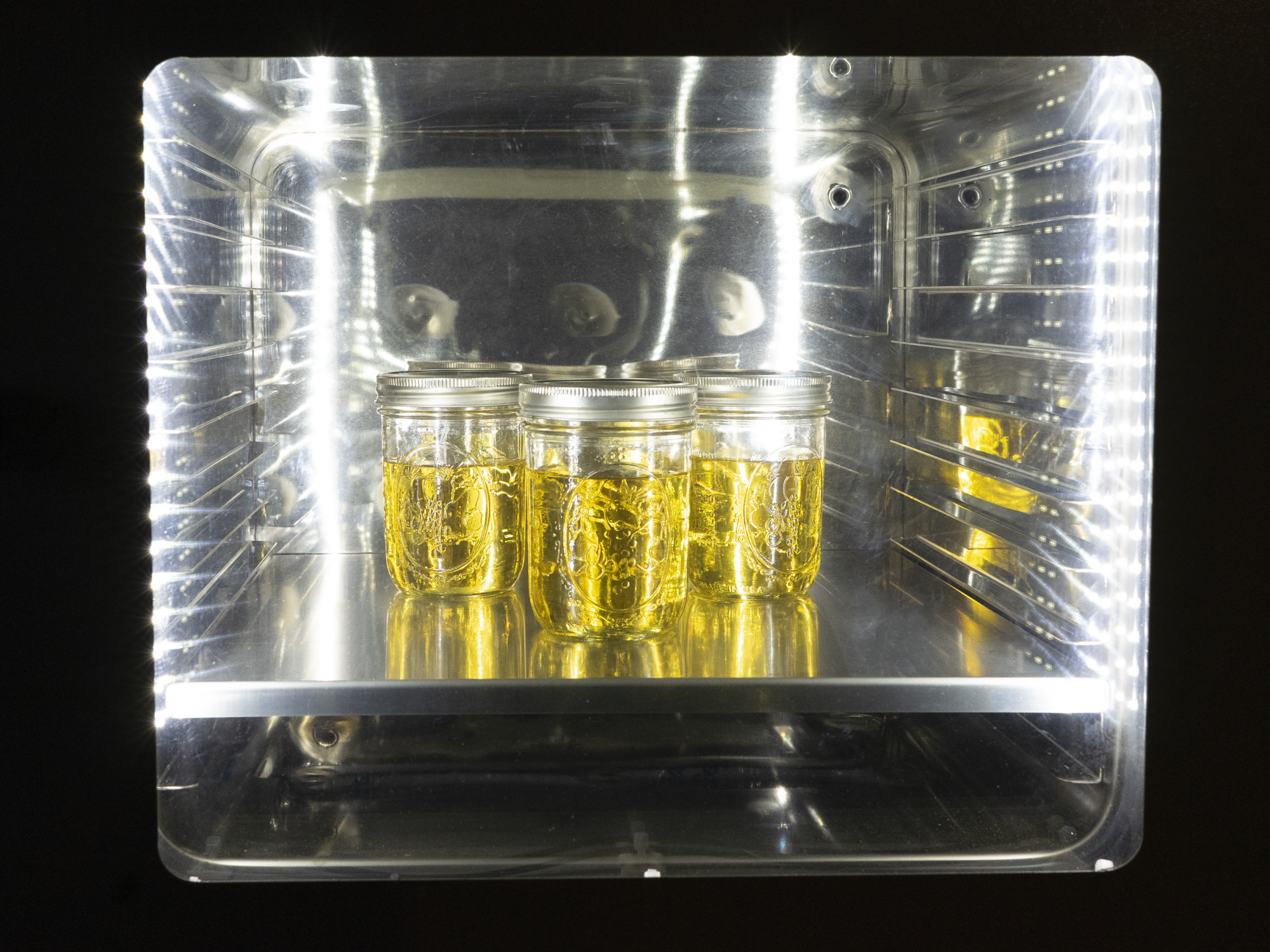 Everyone wants to make the most of their cannabis and get the full value out of the wonderful and valuable material.  Until now, to activate THCA into THC by decarbing with heat desirable terpenes were sacrificed and considered collateral damage.  For years now my focus has been on creating processes for people at home to create the cleanest, high impact, best medicine possible and this next development of the Closed Wash Decarb (CWD) is exciting.  If you are not familiar with all facets of decarboxylation I would suggest reading my decarb post Decarboxylation (decarb) 101: Basic understanding and at home method comparison before going further, because from here I will be treating the basic decarb process and considerations involved as already understood.

WARNING: This is fun and exciting stuff but before we go further I have to stress that this is for informational purposes to share what I have been working on for a couple years and YOU MUST NOT TRY THIS YOURSELF.  The safety issues involved with heated ethanol in a sealed jar have not yet been adequately identified.  If you choose to not abide by this warning you assume all risk and responsibility of the possible danger.

By applying heat to cannabis to accelerate the natural decarb process desirable phytochemicals are lost.  The heat used in decarb evaporates off pretty much all of the desired terpene profile.  Even when we try to trap the terpenes in containers and collect them again it may or may not work well and considerable oxidation and conversion will happen.

I decided I would no longer stand by and accept the loss of desirable components, the roasted flavor of decarbed cannabis, or the mess of decarbing oil as unavoidable. I set out to find a process to execute the necessary decarb without taking the volatile loss.  I started thinking about traditional tincture making (Cannabis Tincture and Tincture Concentrate: A Great Way to Medicate!) and natural decarb in ethanol, and that’s where this journey began.  The answer presented itself by reconsidering my experiences with processes we already use and making a small changes. I haven’t really come up with anything new here, just a different way of looking at what we’ve been doing for a long time.

The idea of CWD is to take a tincture (aka “wash”) made for primary ethanol extraction, then allowing the tincture itself to decarb while sealed and having as little oxygen exposure as possible.  It made sense to me that the terpenes simply had nowhere to go and little to interact with to cause appreciable oxidation and conversion.  If true, this would give us the closest thing possible to clean, fully decarbed medicine with as many other phytochemical components intact as possible.  Once you have the wash, the only way to reduce it to oil without ruining it by adding too much heat is with a rotovap or ExtractCraft Source Turbo and EtOH PRO. This should sound surprisingly familiar, it’s simply putting together traditional tincture making with low temp ethanol extraction. It’s worth noting that the same process can be used by dissolving rosin, BHO, or other THCA concentrates in ethanol and processing. I performed CWD experiments at room-temp, 100°F,and 150°F and the following is what I found.

I started with the room temp exercise hoping that the old-school “decarb in alcohol only takes a few months” was true.  What I found was like any other temp/time decarb graph we’ve seen, the majority of decarb in percentage terms happens early then the tail slows considerably as it gets closer to full decarb.  The process ended up taking longer than anticipated so I pulled the plug at 8-months and 90% decarb. This is probably just too long for and person using it for home extraction.  The processed samples were all deep golden amber and packed full of fresh terpenes like the original control extraction. Unfortunately, for this exercise I was only able to have the cannabinoid content tested and had to rely on my nose for the terpenes.

In addition to what’s in the information above I held a last sample until 18-months.  The wash had darkened considerably and when I opened the jar there was a sour lipid smell so my expectations for the oil very low.  After processing it the resulting oil was a clear dark brown and the sour lipid smell was replaced with a very nice floral cannabis terpene profile.  I was actually pretty surprised and even more surprised when I loaded into a CCell vape cart as is and it was super smooth, potent, and nicely terpy.  It was really dark, but really good. Drawing parallels traditional hash maturation of color, smoothness and flavor.  It was much different than the commercial over the top fortified terp carts; instead more smooth, refined, and rounded.  There’s a lot of further work on maturing these concentrate components like traditional hash or wine that may be very fun.

Natural decarb at room temp moved far too slowly to be practical so I decided to increase the temp to 100°F to measure the acceleration of decarb.  A jar of wash was put into a vac oven, with no vacuum applied, at 100°F.  There were some difficulties with the execution of this test and it got cut short at 3-months, but it still provided some insightful findings that can be extrapolated out using what we already know about decarb curves.  After 3-months at 100°F, 80% decarb was achieved and with terpene testing we were also able to verify that terpenes like b-caryophyllene, limonene, humulene, linalool, and such were still fully represented.  Where 80% decarb took about 6-months at room temp it took only half that time at 100°F.

After halving the decarb duration moving from room temp to 100°F I decided to throw an extra 50% heat at it with hopes it would really increase the pace of decarb and still protect the terpenes.  I used a vacuum oven, again without vacuum applied, to ensure even temp for as long as it took.  I drew from my experience with old-school infusion decarb methods and figured that at this temp CBD should be finished decarbing in 6-days.  To be honest, with the heated, sealed jars of ethanol in the vac oven in the garage, without knowing how safe this was going to be, I didn’t sleep much for 6-days…….

Heated ethanol in a closed container can create a dangerous pressurized situation, hence the danger warning.  To minimize the expansion effect and higher pressure caused by heating, I pre-heated the jars, lids, wash and oven to at least 150°F before sealing the jars.  I loaded the preheated jar of prepared wash and placed it into the pre-heated oven. I removed a sample of the wash daily for 6-days then submitted them for cannabinoid and terpene testing in tincture form.

This is where things began to get really exciting.  As expected, the majority of CBD cannabinoid conversion happened quickly with a considerably slowing tail.  Then, the money shot; the terpenes held steady all the way through!

I saw the THC conversion rate results here also as great encouragement.  The THC in this sample was already in a decent state of decarb, but considering that we already know the bulk of decarb happening early this was still great info to base our next experiment on.

After great results with the 150°F CBD CWD exercise it was time to go after THC with the same temp but more comprehensive approach.  This time I prepared one large wash and split it into four separate jars of 300ml each.  The same preheating procedure was followed with three jars placed into the vac oven, with no vacuum applied, and one jar set aside to be used as a control sample.

The control sample was processed, then one sample was removed from the vac oven, cooled and processed every 24-hours for the next three days.  The Source Turbo by ExtractCraft (www.extractcraft.com) was used to protect the concentrate as much as possible during the ethanol recovery.   The processed concentrates were submitted along with a samples of the flower used (strain: Creamsicle) and the same flower decarbed with the Ardent.

After the great CBD exercise results I knew the direction this was headed and the results didn’t disappoint. They were amazing!

The concentrates made with this process are far superior to any decarbed concentrate I’ve ever seen.  The finished product is terpy, beautiful, and just like a concentrate that hasn’t been decarbed.  I still have a lot of work to do with all of this, but I believe there are a couple undeniable advantages with this process.  First, with all the components intact this is by far the most powerful way possible to make RSO, FECO, and any kind of edible.  Second, this is a great help in making vape carts so the THCA won’t crash and ruin it with crystalizing like with regular extractions.  By partially decarbing a concentrate with CWD at 150°F for 1-day, or maybe just 12-hours, this crashing may be avoided without sacrificing the desirable components to traditional decarb.